Vampires, werewolves, ghosts and zombies have fascinated us for generations. In Slovakia, there are čerty (demons), the vodnik (a malevolent water spirit) and Ježibaba (a forest witch, known further east as Baba Yaga).

Once a year, these multifarious horrors walk the earth together, now joined by aliens, super heroes, gods, psychopaths, pirates and politicians. Seriously, what’s not to love about the great big mash-up that is Halloween?
Halloween is short for All Hallows’ Evening, the first day of the Western Christian triduum1 of Allhallowtide. ‘Hallow’ basically means ’saint’, and Halloween is followed by All Saints’ Day (or All Hallows’ Day - Sviatok všetkých svätých), which is followed by All Souls’ Day (Dušičky). In today’s secular UK, Halloween is by far the most widely celebrated of these three days - not being a religious type, I never encountered the other two before I came to Slovakia.
It is widely thought that many Halloween customs originated from practices associated with Celtic harvest festivals (particularly Samhain), which were later adopted by the early Christian Church, in order to ease the Celts' conversion to Christianity2. Samhain was seen as a time when the veil between our world and the Otherworld was thinner, and 'spirits' or ‘fairies' could more easily cross over. This naturally gave rise to a wealth of traditions, particularly in Ireland, Scotland and Wales.

From Britain to America and Back

Places were set at the dinner table to welcome the returning souls of dead relatives, futures were foretold with apples and nuts, bonfires were lit to ward away evil spirits, and people would wear costumes and go from house to house reciting verses in exchange for food (guising/mumming). Sometimes their costumes would imitate malignant spirits and the wearers would play tricks on people. These pranksters would carry turnips (okrúhlice 3) carved into lanterns with grotesque faces - 'jack-o’-lanterns’.
Halloween was exported to North America in the 19th century by the large numbers of Irish and Scottish immigrants, and our cousins did a great job of fostering the old traditions, even as they became less popular in Britain. The immigrants began to use the native pumpkin for their jack-o’-lanterns, and guising and mumming became trick-or-treating: 'children go in costume from house to house, asking for treats such as [sweets], with the question, "Trick or treat?" The word "trick" implies a "threat" to perform mischief on the homeowners or their property if no treat is given’4.

Much of what we now see in the UK at Halloween was (re)imported from America in the late 20th century. I didn’t see a pumpkin till the nineties - my childhood Halloweens in the 70s and 80s were suffused with the smell of burning turnips (technically swedes/kvaky). I remember toffee apples, and apple bobbing (fishing apples from a bowl of water with only your teeth), but I think that might have been on Guy Fawkes Night (5th November), which had become the dominant autumn festival. Certainly, the traditional bonfires had long-since moved to that date. We mighthave had fancy-dress parties (I’m not sure), but I certainly never went trick-or-treating.

And so, to Slovakia

Truth be told, I didn’t really do anything about Halloween for my first 14 years in Slovakia - at best, I would watch a horror film with Dagmar, and feel slightly sad that there was no Halloween atmosphere whatsoever. On the whole, Slovaks have been brought up to be deadly serious at that time of year, as it’s a time for remembering the dead, and lighting candles on the graves of relatives. I remember once seeing the candles in the graveyard from my kitchen window in Humenné, and thinking that it looked lovely, but beyond that, I’m afraid All Saints’ Day means as little to me as Halloween does to many Slovaks.

Then, in 2012, we moved from our flat in Košice to a house in a new housing development, Slnečná Strán, in the nearby village of Vajkovce. Our daughter, Izzy, was three at the time, and we were at a point in our lives where we had to start choosing, or building, the traditions by which our little family would live. I was only too glad of the excuse to get into Halloween 🙂 So I carved my first ever pumpkin (turnips being sadly unavailable) and we decided to try our hands at trick-or-treating - I dressed as Thor, Izzy was a witch, and Dagmar was some kind of devil. We elected to restrict ourselves to ‘the Stran’, for fear of upsetting the people from the village proper with our diabolical activities. 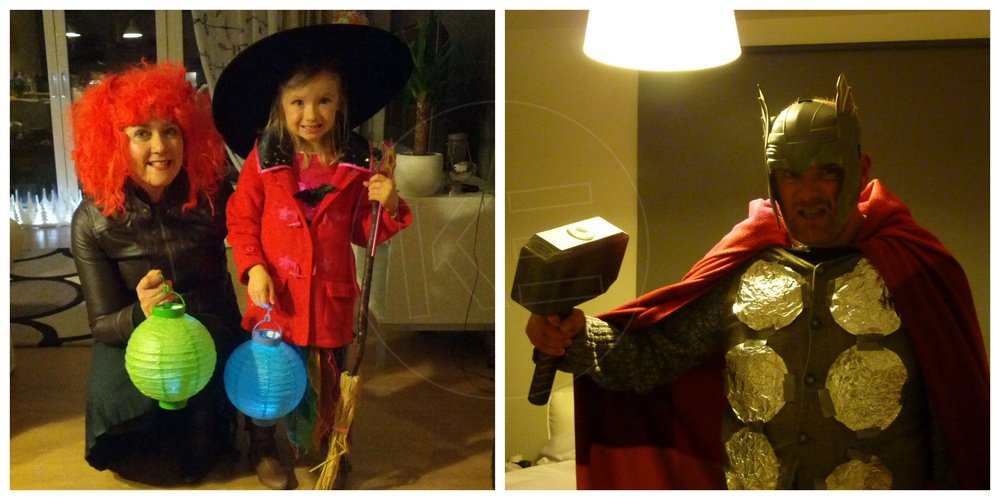 It went pretty well, to be honest. Every time someone opened their door, I would announce, in Slovak, ‘Good evening, mortal. I am Thor, God of Thunder’ and press the lightning button on my plastic Mjolnir. People didn’t seem too freaked out by this (someone even offered to fight me - jokingly, I think) and everyone seemed to have at least some idea what was going on. Some were a bit hazy on the details, though - at the end of the night, in addition to a pile of sweets and chocolate, we had also managed to collect a bottle of Napoleon brandy. A truly Slovak treat!

The years since then have seen a gradual increase in Halloween activity on the Stran. Izzy has been the Hulk and a vampire, Dagmar a cat and a devil again, and I’ve been a zombie, a paper-craft dragon, Darth Vader, and some kind of Jason Vorhees character (not my best). My pumpkin carving has shown significant improvement, we’ve grown our own pumpkin twice, and even had a pumpkin painting party.

More people have knocked on our door, not only from the Stran, but also from the village itself. We did have a bit of a fail last year (nobody home), but this might be more a testament to our falling popularity and/or our insistence on trick-or-treating on 31st itself - it seems that, in order for Halloween and All Saints’ to coexist, Halloween is probably best celebrated a respectful few days before. 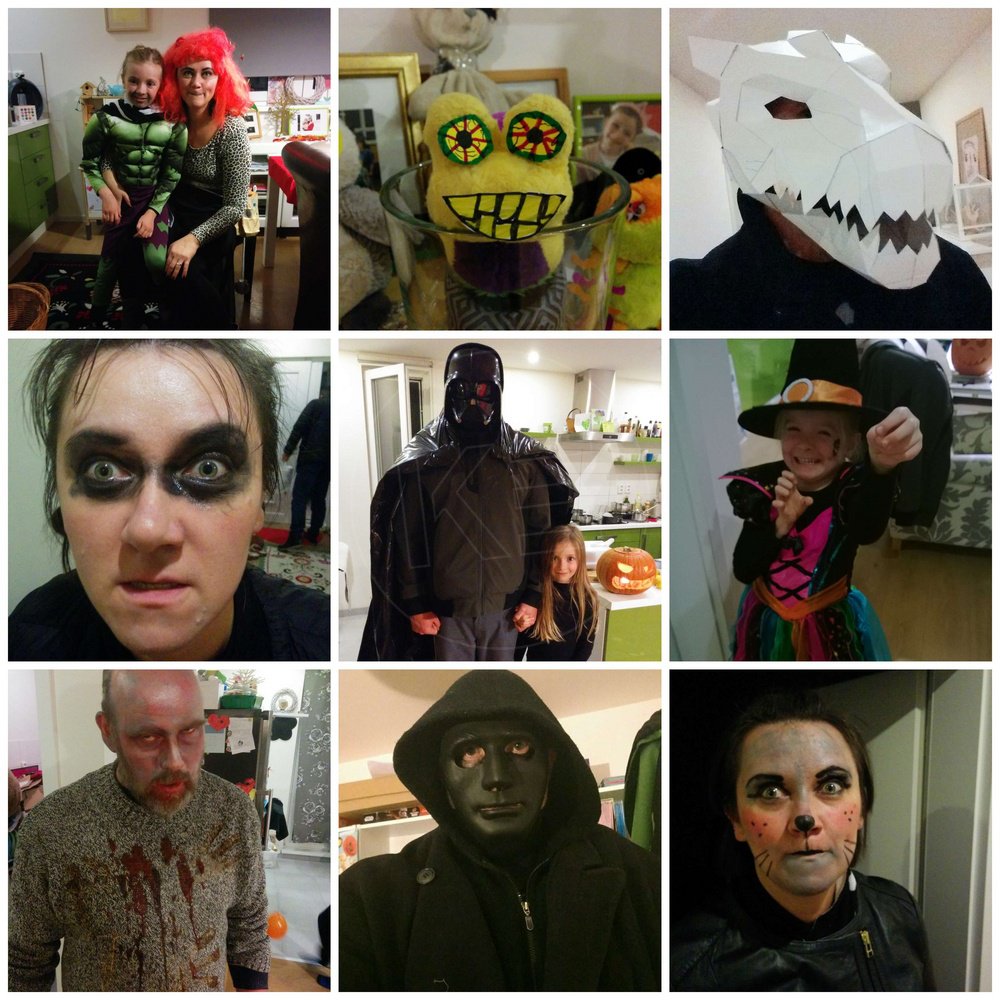 So, if you’ve never done Halloween, have a go! Go on, go on, go on, go on, go on! If not this year, then plan for next. Your kids will love it - it’s just like Easter but with more monsters and less innate sexism! Pumpkin growing and carving is great! Spicy pumpkin seeds, banana ghosts and toffee apples are awesome! Paper-craft is enormously satisfying, and dressing up is hugely liberating! Go on, you know you want to.

Pumpkin seed recipe, Snacks and crafts, Feet Loaf, Halloween Punch, Paper-craft masks (you have to pay, but not a lot), How to make fake blood.