Why are you here?

Why did I stay? How did I end up in Košice?

My students often ask me why I came to Slovakia. And when they learn that I’ve lived here for almost nineteen years, some look a little puzzled - why on earth did I settle here, when so many Slovaks have moved in the exact opposite direction? I'll try to explain. 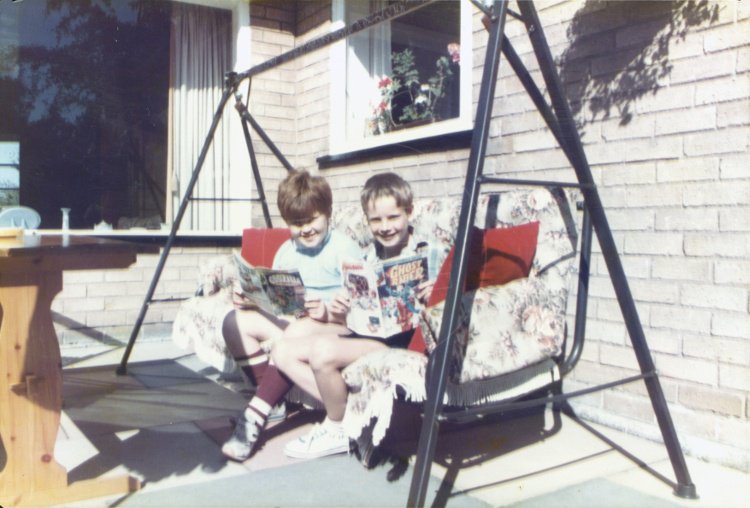 I was a clever lad at school, but with very little idea of how the world worked, and how to deal with people. My home town of Widnes was founded on the chemical industry, my dad was an industrial chemist, and I excelled in science at school. At the age of eighteen, I won a place at Oxford University to study Chemistry. And hated it.

Oxford was great - an amazing city with loads of lovely people and one of the most prestigious universities in the world. And science was in my blood - it has ever been the lens through which I view life’s wonders. But I was immature, and living away from my parents for the first time; the freedom went to my head. I had an absolutely fantastic time at Oxford, but very little of that actually involved Chemistry.

In my defence, it didn’t help that the Chemistry at Oxford was not the same as that of my youth. I'd had the best chemistry set a child could wish for, as my dad brought ‘extras’ back from work, and we also had really good practical lessons in school. Chemistry for me meant test tubes, changing colours, precipitation, making smells and blowing things up in the garage. And the genius of the periodic table, obviously.

At Oxford, Chemistry quickly started to resemble Physics (never my favourite) and shortly after that became Maths. I suppose I’m being a little selective in my memory, but this dryness, combined with my immaturity, was not a recipe for success. Honestly, I should’ve studied Biology - I think it would’ve been much more engaging. But if I had, I probably wouldn’t be here in Vajkovce writing this blog.

My attitude to work at university. I hope I have subsequently redeemed myself / JAMES BLORE

Anyway, I eventually finished my degree, and had no idea what to do next. I wanted to stay in Oxford, so ended up applying for a teacher training course at Oxford Brookes (the town’s other, younger university). This is one of the two ways of becoming a qualified teacher in the UK - a three-year degree plus a one-year Post Graduate Certificate of Education (PGCE); the other is to do a four-year ‘Bachelor of Education’.

The PGCE was a good experience and did help me to grow up a bit. I also learned that I didn’t want to teach science to a bunch of young people who have very little interest in such things. I was still too young to have much innate authority, and I didn’t want to have to ‘wear a mask’ every day to maintain discipline. But I did enjoy teaching, in principal at least.

I chose not to get a full-time job as a Newly Qualified Teacher, and instead moved back to Widnes and did some supply teaching through an agency. Every day, I would be sent off to a new school in the Liverpool area to cover the lessons of a teacher who was sick. It was a battle, to be honest - you can probably imagine how little respect teenagers pay a 22-year-old who they’ve never met before, and will likely never meet again. But it was another good experience, and pretty well-paid, considering I was now living at home.

After just 3 months, I’d saved up enough to go travelling - something I probably should’ve done before I ever went to uni. I wanted to go to America; I’d grown up reading and collecting Marvel comics, and the adverts at the back of the comics always hinted at a completely different life, full of twinkies, oreos and functioning x-ray spectacles. Later, I had watched endless American films and serials (including all of Friends, obviously). I wanted to sample the delights of America for myself.

However, I also wanted to travel for a longer time, and America would be expensive, so I decided to spend a week or two on the west coast, then travel round Mexico and Guatemala for a couple of months before returning to the US for another week. To cut a long story short, I had a great time, grew up a bit more (I was almost an actual adult by this time), and discovered that being in another country was pretty interesting. So, I liked teaching, but not in a UK state school, and I liked being in other countries. Hmmmmmmm…… 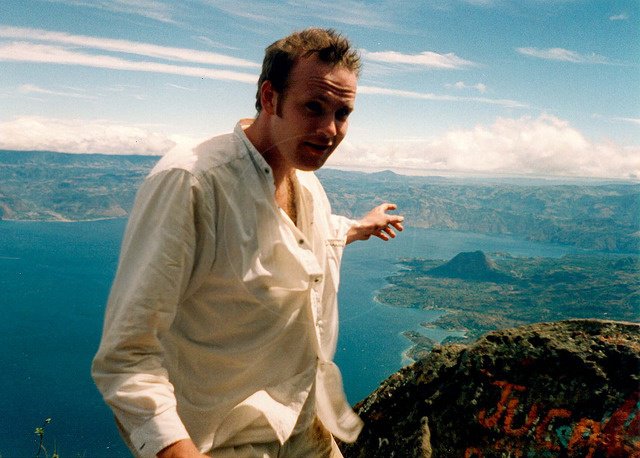 I did a bit more supply teaching, and then, in June 1997, my building society, the Halifax, decided to float itself on the stock market. In becoming a public limited company (‘a.s.' in Slovakia, maybe?), it distributed shares to its customers, which I sold for £1500 - I was rich! In an act of uncharacteristic maturity, I saved half the money, and spent the other half on a Certificate of English Language Teaching to Adults (CELTA) at International House in London.

The CELTA is an initial training course for people who want to teach English as a foreign language. And International House was the best place to do it. I was now a trained secondary science teacher, with an additional qualification in ELT, and an interest in living in other countries - our story is nearly complete. If you’ve made it this far, I congratulate you!

I was not quite ready to leave the UK - I'd spent a total of one year living at home in Widnes, travelling in the Americas, at home again, and then training in London, and now felt an urge to return to Oxford, where I’d spent the happiest (and least productive) four years of my life. And so it was that I got a job at an Oxford summer school, teaching English in the mornings and doing activities with the kids in the afternoons.

This was followed by one more year of teaching Chemistry and English at a tutorial college in Oxford, and one more summer school, before I finally decided it was time to bite the bullet and apply for ELT jobs in the big wide world. It was the summer of 1998, and at that time, there were a lot of jobs in what British people call Eastern Europe (that’s Central Europe to you). The first three job offers I received were from schools in Prague, Warsaw and Humenné.

My decision was clear - I wasn’t that keen on large cities, and if I was going to live in a foreign country, I wanted the experience to be authentic, not surrounded by other native speakers. Humenné was the place for me. I would be working for the Akadémia Vzdelávania, which was using a UK school called Language Link as a recruiting agency for teachers all over Slovakia.

And so, in September 1998, I caught a bus from Victoria Coach Station in London with a large group of other teachers, all heading for Bratislava. Roughly 24 hours later, we arrived. After a short (and nearly fatal) taxi ride to the train station, I boarded a train bound for Košice, along with all the other teachers who would be based outside of Bratislava.

In ones and twos they stepped off into the unknown, until only four of us were left - me, Michalovce Chris, and Ben and Louise, who would be staying in Košice. I was picked up from Košice station and driven to Humenné by the director of the Humenné AV (who spoke no English, as far as I ever found out) and his assistant, who looked uncannily like Dana Scully from the X-Files. And that is how I came to Slovakia. 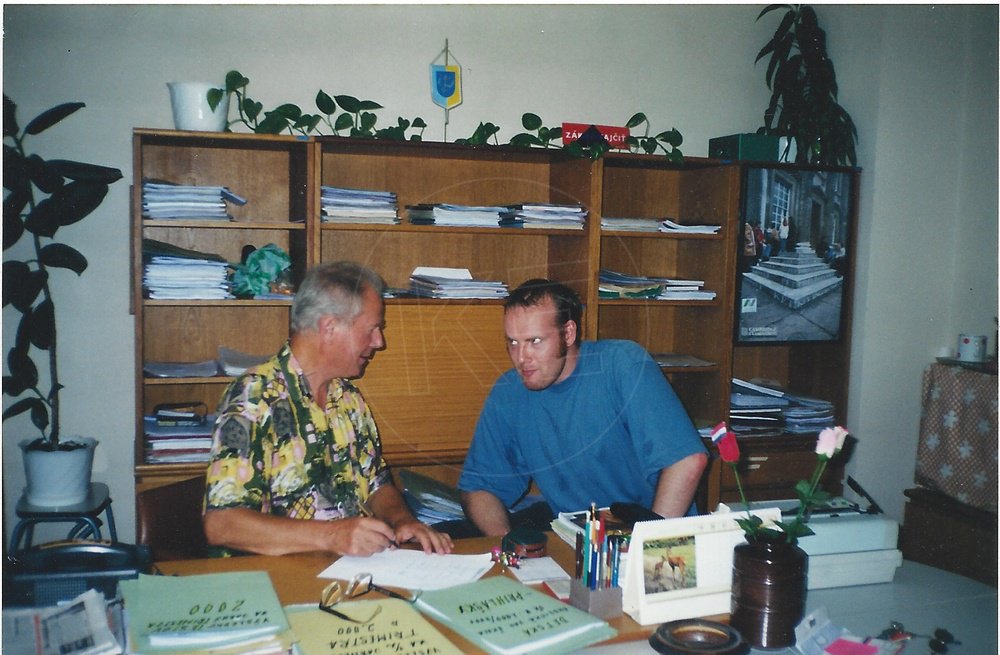 What happened next? Why did I stay? How did I end up in Košice? I think I’ve gone on long enough, so I’ll leave the answers to those questions for next time :-)

I'm James Blore and I am the Director of Studies at The School of Blore jazyková škola, Košice. I live in a small village with my wife, Dagmar, and daughter, Izabela. I am currently the Central European Dice Masters Champion, and I am also interested in growing, cooking and eating food, building an army of toads, and playing the drums. Find out more www.blore.sk or facebook.com/blore.sk.